Who We Are
>
News & Reviews
>
News
>
Remembering Joan Nordell

Joan Nordell was President of Emmanuel Music from 2003 to 2010, leading the organization through times of unprecedented challenge and change. Joan was a force of nature indefatigable in her energetic devotion to doing whatever it took to bring Emmanuel Music to new successes. Everyone who worked with Joan knew that she was unflagging and unstoppable. 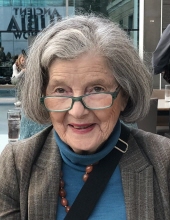 She always expected others to show the same drive to make changes happen quickly, and of course no one could keep up with her. But Joan never stopped pushing for change, never left a stone unturned or a small detail overlooked, and left Emmanuel Music stronger and better. Everyone in the organization felt the power of Joan’s energy and her unwavering commitment to the mission, the work, and the people of Emmanuel Music.

Under Joan’s leadership, Emmanuel Music became a more mature and solid organization. She expanded and professionalized the board and created the first committees:  Finance, Marketing, Nominating, and Community Connections (outreach). Joan also presided over the transition from long-time Executive Director Lenny Matczynski to the hiring of Pat Krol, an exceptional leader over 15 years until this past August 2021. Joan’s list of personal contacts was extraordinary, and she brought many new people into the audience and among the ensemble’s significant donors. Joan respected and strengthened the relationship between Emmanuel Music and Emmanuel Church, steering it through troubled waters that few today could imagine. With each change from old ways and long-time personnel, Joan treasured and retained the best of Emmanuel Music’s traditions as she helped the organization grow and stabilize.

No transition was more fraught than that after the death of founder Craig Smith in November 2007. When John Harbison stepped in for almost three years as Acting Artistic Director, Joan, Pat, and newly hired Priest-in-Charge, Pam Werntz, led a complex and difficult process to find a successor able to lead this unique and venerable organization. Joan formed a committee with stakeholders representing Emmanuel Music, Emmanuel Church, and the musicians, which painstakingly created a job description that encompassed all those perspectives and needs. Although some feared that Emmanuel Music could not continue and thrive without its founder, Joan, John, Pat, and Pam kept the faith. Joan’s calm determination boosted the confidence of all. And she was right: the process ended with the successful hiring of Ryan Turner, now in his 12th season.

From the outset, Joan helped Emmanuel Music reach new artistic heights, thanks to being a tough and pragmatic foil to Craig Smith’s visionary dreamer. In 2006, when Craig passionately wanted to perform the three Handel operas based on Ariosto’s Orlando Furioso, he was proposing a pie-in-the-sky project with a cost sufficiently astronomical to make the board uncomfortable. But Joan understood what the project meant to Craig and to the organization, and so Craig’s vision became her mission. She rallied the board and the donors and gave the go-ahead only after raising enough money to be certain that the rest would follow. Performed to acclaim in the spring of 2007, just months before Craig’s death, these operas became the crowning achievement of his career.

John Harbison, now Principal Guest Conductor, captures the essence of Joan’s style and her legacy: “Her manner of following through had a tough realistic tone which ultimately brought everyone, including the Music Directors, to a realization that we still had new levels to reach.” Our achievements today rest on the foundation Joan established.