trumpet
Who we are
>
Musicians
>
Richard Kelley 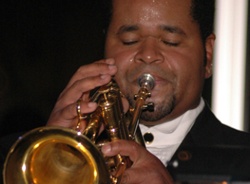 The career of Grammy nominated trumpeter Richard Kelley is not only a testament to the versatility of his instrument, but also the ability of one individual to excel across the broadest possible range of music. From Symphony Orchestras and chamber music to jazz, studio work, and Broadway shows, Mr. Kelley has built a formidable track record of working at the highest level of the profession.

Mr. Kelley is currently based in his hometown of Boston Massachusetts, where he performs regularly with the Boston Symphony Orchestra, Boston Pops, Boston Philharmonic, and other surrounding orchestras. Previously based in New York City, Mr. Kelley was the Principal Trumpeter of the Queens Symphony Orchestra and the Philharmonia Virtuosi. He also performed regularly with the Metropolitan Opera, the Brooklyn Philharmonic, the New York Pops and many other orchestral ensembles. From 1987 to 1994, he was a member of the groundbreaking Meridian Arts Ensemble — the first brass quintet ever to win the prestigious Concert Artists Guild competition and he continued to stretch the boundaries of brass solo and chamber music as a member of Boston Brass from 1997 to 2005 and premiering and recording Trumpet solos by DanieI Pinkham, Richard J. Clark and a Concerto for two Trumpets by Stephen Paulus.

Mr. Kelley was born and raised in Boston, graduating from Boston Latin High School. At age 16 he was featured as a soloist with the Boston Symphony Orchestra and was engaged for repeat appearances with both the BSO and the Boston Pops. Those performances served to establish Mr. Kelley's relationship with Charles Schlueter, the Principal Trumpeter of the Boston Symphony Orchestra, with whom he studied for the remainder of his high school years. He continued his education at the Juilliard School in New York City as a student of Mark Gould, Co-Principal Trumpeter of The Metropolitan Opera. A passionate believer in the power of musical education, Mr. Kelley taught for two years in Juilliard's "Music Advancement Program" for inner city youth and continues to pass along his knowledge and love of music in Boston as an adjunct professor in the Prep Division of the New England Conservatory.

During a flourishing orchestral and chamber music career, Mr. Kelley has also capitalized on his ability to swiftly and fluently traverse different stylistic genres to become a force in the studio arena. His work can be heard on a wide variety of recordings, from national commercials for Dr. Pepper and IBM to the Oscar and Golden Globe winning soundtrack to Disney's Pocahontas. He has also collaborated with Andrea Bocelli, Yoyo Ma, Ray Charles, James Taylor, Seth Macfarlane, the Rock band Boston, Jimmy Page and Steven Tyler of Aerosmith, award winning composers John Williams and Danny Elfman and more.

Mr. Kelley has performed with several jazz and funk bands and musicians, including trumpeter Lew Soloff of Blood Sweat and Tears and he has been heard in countless Broadway Performances, including productions of Aladdin, An American in Paris, Cats, Les Miserables, Annie, Show Boat, Crazy for You, West Side Story and many others.